After listening to hours of audio books and building my studio, I find it is possible to worry too much about audio quality. The noise floor in your studio only has to be good enough. Because the broadcast medium or network connection that sends your work to consumers will almost certainly be noisier than your studio. Additionally, your microphone, interface, and recording software need to be good enough, but you don’t need a $10,000 recording studio to make good voice over recordings: this is the 21st Century, where people record wildly popular video and audio using only their smartphone. This doesn’t mean you can be a successful voice actor using just your smart phone. You need to be sure your technical details are good enough: your hardware, your recording space, your production processes, etc. But they don’t need to be better than that.

What matters most is your skill as a voice actor. In other words, can you deliver a performance? This is the skill that will set you apart from other voice actors and voice over artists: because everyone who is staying afloat in this business has acceptable recording quality and hardware. But really successful voice actors can sound good if they’re recorded through a 1960’s tape recorder or a state of the art digital recording studio.

Think of it this way. Let’s say Jimi Hendrix was still alive. You give him a $100 guitar and asked him to play, he would make beautiful music with that cheap instrument, just like he would if he had a $5000 custom Fender Stratocaster, because the artist’s skill typically matters more than the instrument. Can you make your voice sound good whether you use a $100 mic, or a $5000 one?

I just finished narrating Emma and Adam, by Jason Huza. This story has a great plot. Look for the audio book soon, or read it now!

I’m taking a break from ghost stories and thrillers to narrate a drama. I’ll share more details as production continues.

In the meantime, keep your eyes out for Recon Elite, written by Viktor Zarkhov, and narrated by me. It’s a fun sci-fi story that asks interesting ethical and ecological questions about humanity. It should be available soon!

If you like monster movies and war stories, check out Vietnam Black. It’s out now!

The recording booth is done, and it sounds great! I’ll do a longer post about the details of building this booth, but I think building a booth is a great option for handy voiceover artists. My booth cuts out the ambient sounds and room acoustics that previously dogged my recordings, and it allows me to focus on creating characters, rather than worrying about the technical recording details. The materials cost less than $700 (USD) to build, which saves me thousands in overhead costs. It took about 30-35 hours of work to complete.

Here is an audio sample recorded in the booth, with no processing. Only normalization is applied:

I think there are cases in which you might not want to build a booth. For example, those who are making enough income that their time is better spent recording rather than building, or those who have no interest in taking on a relatively complex building project. I’ll write a more details build vs. buy post soon, but I wanted to provide a little information since I’m excited to have this new asset in production!

The Haunting of Harper House is available on iTunes and Amazon now! Check it out. It’s a fun thriller.

After nine hours of work, my sound booth’s floor and ceiling are ready to go. The walls are coming up next! 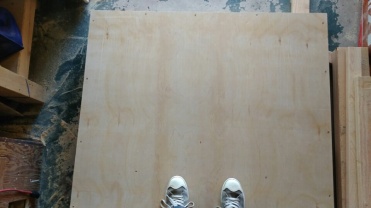 This is where I’ll find some silence! 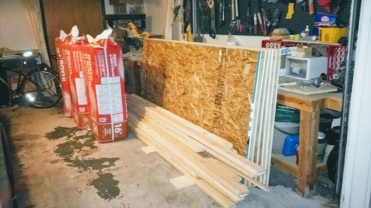 The recording of The Haunting of Harper House is on its way to sales. Keep your eyes out for a fun horror story in the next two weeks!

I just finished another book about stoicism by James Harris, Epictetus’ Discourses. You can find it on Audible. And I just started narrating a horror/thriller title by Carrie Bates — more on that soon.

The new vocal booth will be under way soon as well. Lots of good changes coming!

Edit: I’ve recently heard of one audio book narrator who quit his job on royalty share books, so it appears there are profitable royalty share deals out there. Time to go hunting and find them!